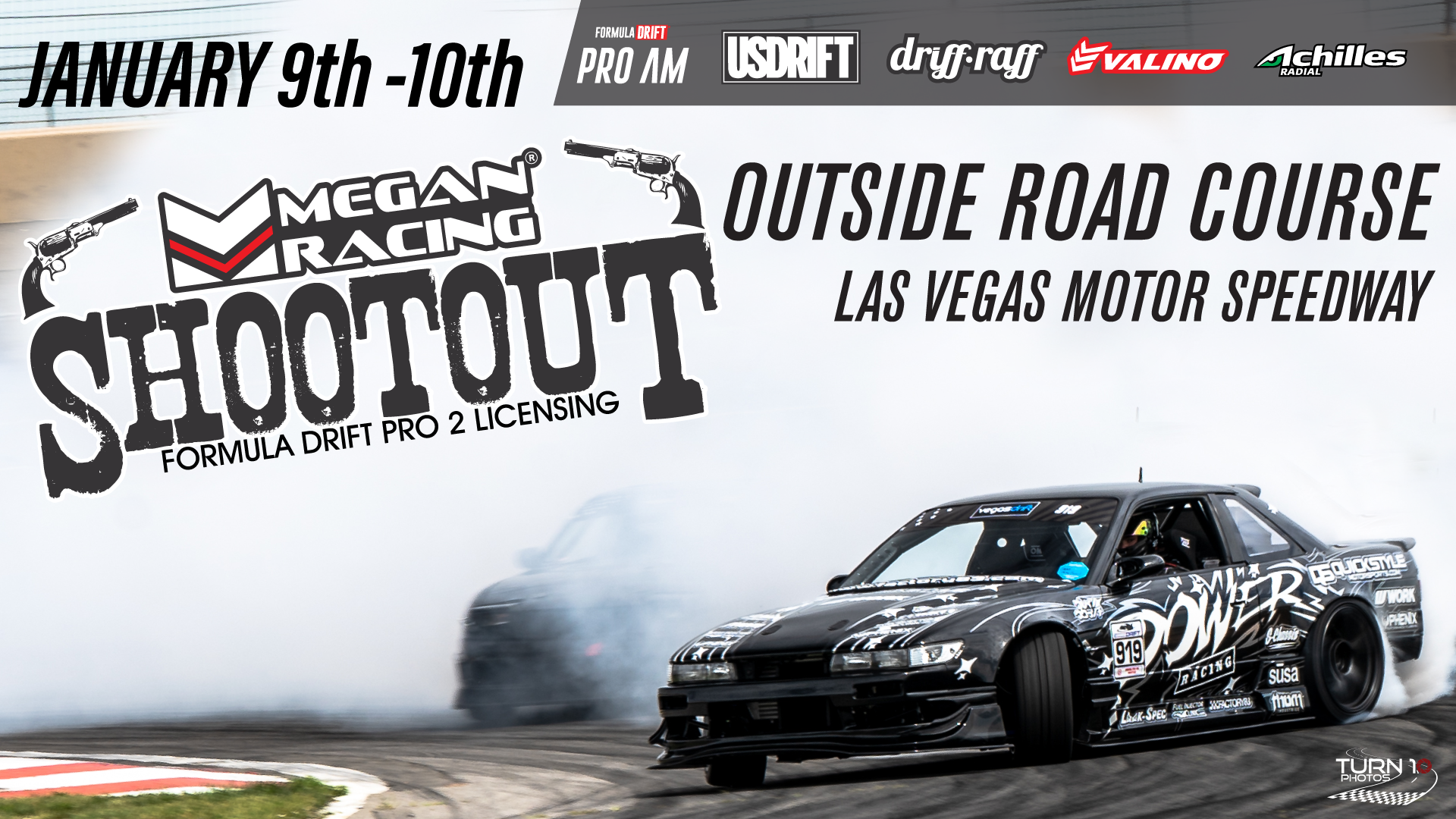 Directions from I-15 N

The competition course will utilize the large main sweepers of the Las Vegas Motor Speedway Outside Road Course.

If you’re not familiar with the Shootout event, here is a detailed explanation of the format. The event will be a 40-car double elimination competition. Friday will consist of practice sessions for all competitors with spotter's help available from the judges at select times during the practice sessions. Since this is a double elimination bracket event, there will be no qualifying for the event. At the conclusion of practice on Saturday, we will randomly seed the drivers in the bracket for the event on Saturday. This is done to allow more tandem action for the drivers, as well as provide drivers with a second chance to continue through the bracket should they lose a battle, crash, have a mechanical failure, or other instance that may result in a loss. Sunday will consist entirely of tandem battles until a winner is determined.

Some of the advantages of the double elimination bracket are:

Some of the disadvantages of the double elimination bracket are:

Eligible participants must be at least 18 years old (16 years old with parental consent*) and possess a valid state issued driver's license. Drivers are eligible provided they have not competed in any round of the Formula DRIFT PRO1 Championship in the last 3 years (participants in 2017 and prior are eligible). NOTE: No restrictions for Formula DRIFT PRO2 competitors.

*A minor release form must be filled out and be on file with Vegasdrift/USDrift for 16 and 17 year old participants. All minor participants must have tandem competition experience prior to the event, and at least one parent or legal guardian present at all times during the event. Select individuals under the age of 16 years old that have been pre-approved by Vegasdrift/USDrift may be allowed to participate. For additional information, please contact [email protected]

The competition portion of this event will be limited to only 40 drivers. The cost to enter is $500.00 and includes driving on Saturday and Sunday. Registration is first come first served and is currently open on Vegasdrift.com.

To avoid potential instances of inflated resale, registration transfers will be handled on a case by case basis and be at the sole discretion of Vegasdrift. If a transfer is permitted, a $75 fee will be withheld from the registration. Please do not purchase an entry unless you plan on competing. Entries are non-refundable.

There are changes in this years rulebook from last season.  Please review the entire rulebook.  Last seasons Tech/Safety “Recommendations” have been instituted this season for all Formula Drift Affiliate ProAm series.

If you are interested in becoming a partner and/or vendor at this event, please contact us at [email protected]